The TPJ Racing team made their way to Crawfordsville, IN for the final round of the 2018 Lucas Oil Pro Motocross Championship at Ironman Raceway.

The final round was wet and muddy, well it was flooded and soupy but the track conditions made for a great day of racing.  They say rain is the great equalizer in Motocross, a fact proven when the final checker flag waived for the 2019 Pro Motocross season.

Jimmy Weeks, who is typically fond of the mud, struggled to qualify at Ironman.  The reduced qualifying sessions meant he wouldn’t be able to redeem himself and wouldn’t compete at the final round.  Weeks finished out the 250 MX Championship in 30th place; a feat made possible by his 16th place finish at Unadilla.

Mason Wharton set a goal at the start of the season to finish out strong and gain some points.  Though he didn’t gain any points, he certainly finished off strong.  Wharton qualified for the day in 12th, a huge improvement over the previous 11 rounds.  He had an overall finish of 33rd in the 250 MX class at Ironman after going 30-27 in moto’s 1 and 2, respectively.

Carson Tickle showed up prepared for a mud battle and qualified in 32nd place.  He went 36th in moto 1 and 38th in moto 2 for a 39th overall finish.  Tickle nearly accomplished his goal of qualifying for every round this year; an unfortunate series of events left him with 11 out of 12 secured.  Though he didn’t gain any point he’s proud of what he achieved: several top 25 finishes, increased speed each week and valuable lessons learned throughout the season.  Great job Carson!

John Short didn’t let a nearly last place qualifying position get him down; instead he used it as motivation to prove what he could do come race time.  Short battled and fought for each position earned during the motos, securing him an overall finish of 20th for the day.  He only raced 6 out of the 12 rounds but still managed to finish in 35th place in the 450MX championship; an incredible accomplishment.  “…I was able to check some personal goals off my list this season and I look forward to working hard towards reaching some new goals in 2019.”  Short said via an Instagram post following Ironman. 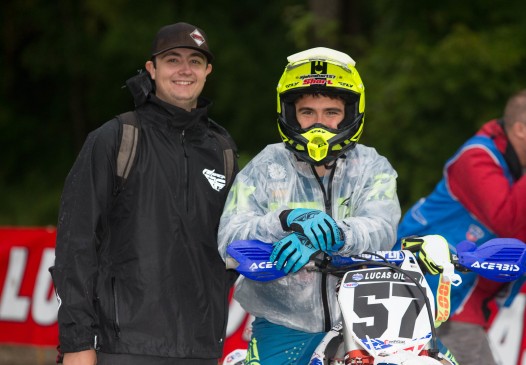 Dylan Merriam launched his Yamaha YZ450F off the start of moto 1 grabbing the coveted holeshot; again.  Side note: check out the photo below, he pulled a tearoff on the start and crossed the holeshot line one handed.  He finished moto 1 in 35th place, and finished moto 2 in 33rd.  Merriam has made remarkable progress in the past few weeks and was able to finish out the season strong with a 16th place finish in the 450MX class.

This has been an unforgettable season, and we would like to take a minute to thank the people who make this possible.  Our mission at TPJ Racing is to provide support to privateers as they navigate their own professional journey; and our sponsors are a huge reason we are able to do that.

Check out each of our sponsors websites by clicking on their names below!

Bruised, Bloody, & Banged up. Not a problem when you're tough as nails. @hubalicious47 👊
The team in all its glory.
Strong ride by @kylegreeson in moto2 - 24th
@ramella112 Scored his first points of the series with a 23rd overall 👏
We’re ready for Round 7! But first we need to thank our incredible sponsors, without their help, we couldn’t help our riders 👏🏼👏🏼
@ramylleralves 25-14 for 18th overall