The TPJ Racing team travelled to Glendale, AZ to compete at the fourth round of Monster Energy Supercross at the University of Phoenix stadium.

The TPJ Racing team was very fortunate to be involved in a lot of press opportunities this week. Our riders were very busy on Friday and Saturday giving interviews and riding for several media outlets. We are very thankful for these opportunities to promote our riders, team and sponsors.

On game day, every member of the TPJ Racing team was able to qualify for the night show. All six of our riders performed well during qualifying and laid down solid lap times. 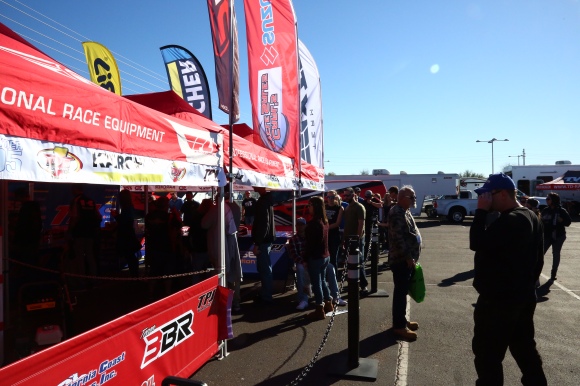 After qualifying for the night show, our riders spent time at the weekly meet and greet with hundreds of TPJ Racing fans. Fans waited in line for the chance to chat and get autographs from Dustin Pipes, Nick Schmidt, Broc Shoemaker, Adam Enticknap, Chad Cook and Tyler Enticknap. We are starting to see a longer line each weekend, and we love seeing and meeting the fans that support our program. 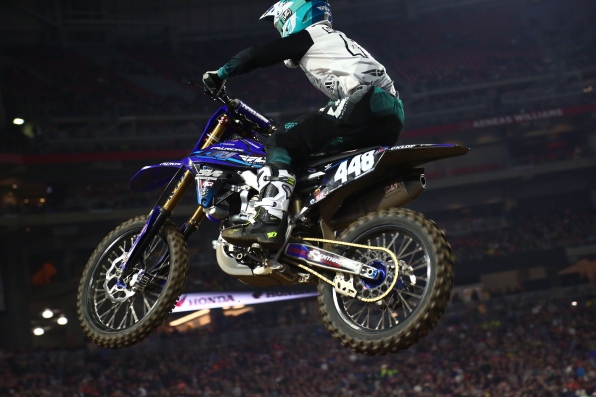 TPJ Racing rider Broc Shoemaker was extremely close to making the cut in Phoenix. “Once again I just barely missed the main due to my starts” he explained. “Passed into 11th in my heat with the pack ahead of me and got taken out. In the LCQ I missed the triple in the first lap and it hurt my efforts to catch 5th. I had the speed all day, and even had the second fastest lap tome in the LCQ – but my starts hurt me.”

Although he did not make it to the main event, Shoemaker maintains a positive outlook. “On the upside, my crew and I are stoked that all the off season work is paying off.” He said. “It’s starting to show each week and I’m gaining more confidence and speed. We will keep chipping away at it and it will come.”

Chad Cook was able to make it to the night show in the 450 class after nursing an injury for weeks. He would hit a stroke of bad luck again in the LCQ – getting caught between riders off the start catapulted him off his bike and into the dirt. Thankfully Cook was unharmed, but the crash kept him from the main event.

Tyler Enticknap, Dustin Pipes, Nick Schmidt and Adam Enticknap also lined up in the LCQ in Phoenix alongside Cook. When the gate dropped, Schmidt took the hole shot and broke away from the pack – but it was a short lead – Cook’s crash on the start resulted in a red flag. In the second start, Schmidt got caught in the middle and fought his way up to second before the checkered flag. Schmidt was able to qualify for the night show but Pipes, Tyler Enticknap, Chad Cook and Adam Enticknap just missed the cut.

Phoenix was a rough night for our riders, and it was a rough night for even some of the most seasoned riders. The track conditions proved to be a difficult task. Although some of them did not make it to the main event, they showed continued progress in lap times, speed and stamina. Rough nights come with racing, and our riders are ready for their next chance. We are looking forward to turning the progress into results next weekend in Oakland.

We want to extend a thank you to the sponsors who help get our riders to the starting line every week. We also want to thank the fans who support us online and in the stadiums each weekend.

We are en route to Oakland, CA for the fifth round of Monster Energy Supercross at O.Co Coliseum – we hope to see you there.