The TPJ Racing team travelled to San Diego, CA to compete at the second round of the Monster Energy Supercross series at Petco Park.

As a part of military appreciation week, the TPJ Crew had the opportunity to visit NASNI (Naval Air Station North Island) and take a tour of the base as well as meet military personnel and even get a first hand look at military aircraft. Later that day, Chad Cook and Adam & Tyler Enticknap helped the Geico Honda team serve dinner to troops. This was a very humbling experience for the riders, who were extremely grateful for the opportunity.

The day of the event, our riders had great runs in qualifying, and all five riders qualified for the night show. With each moto being extremely stacked, our riders put up great fights and lap times against some high-level factory riders. 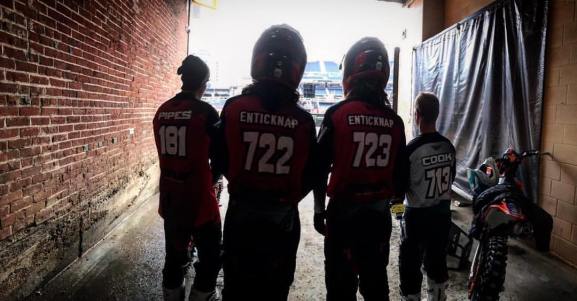 Tyler Enticknap came within inches of qualifying for his first ever 450 Supercross main event after a hair-raising battle in the LCQ. We have faith that he will adapt based on the  first two rounds and continue to evolve until he makes his way into the main. Adam Enticknap was charging hard at Petco Park but some jumbled starts had him trying to make up lots of ground with little time. With some good luck, we are sure to see him in the main event soon. While he was still battling being sick, Dustin Pipes put in great effort and rode his best. We anticipate that he will be back to his usual self by the next round. Chad Cook was able to qualify for the night show this week after a painful crash in Anaheim. While our riders may not have had a perfect night on paper, they made a lot of important progress which was noted by television reporters and noted on Fox Sports 1 throughout the night.

As we focus on the second race at Angel Stadium, we want to thank the thousands of fans that have cheered our riders on. We also want to thank all of our 2017 sponsors who put in so much effort to help our riders progress.